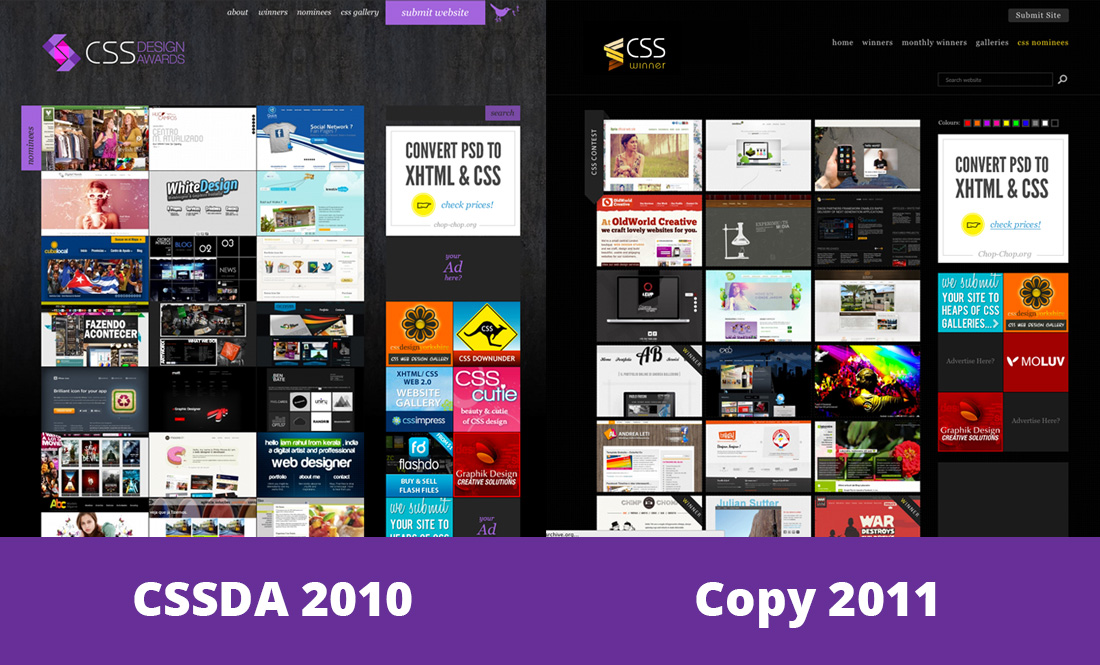 There is a phrase going around that says "imitate until you innovate”. For victims of plagiarism it’s not the most comforting thing to hear but the fact remains that most of us are inspired by those before us. But where does inspiration end and plagiarism begin?

If you're going to design a new car then it's going to need wheels and you're not about to bolt on seven of them just to be different. It also needs a windscreen, some form of engine, doors, seats etc. These things are inherent to the design of a contemporary car. However, by innovating in other ways and trying to present these elements differently, creativity and a good amount of originality can be restored.

Plagiarism is another story and in many circles is not acceptable in any form. One very recent case was the withdrawal of the Tokyo 2020 Olympic logo due to the similarity to Theatre De Liege's logo. The similarities are highly debatable but to an organization like the Olympics, any talk of plagiarism reflects badly on the ideals behind the spirit of the venerated international competition. See the story via BBC's website » 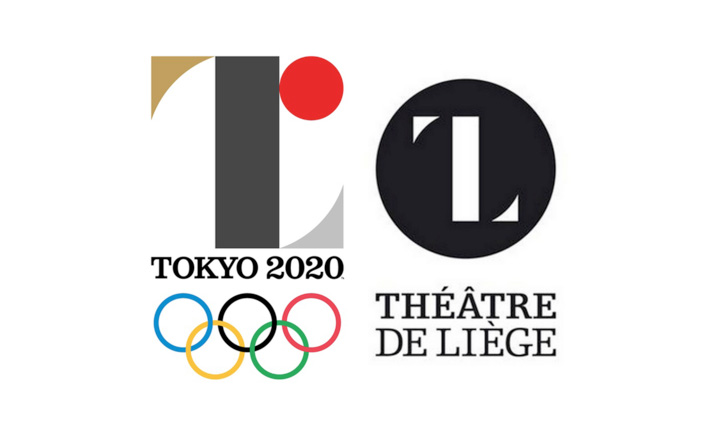 The first half of this article deals specifically with plagiarists of CSSDA. If you want wider examples, scroll down the page.

Recently we were asked by members of the web design community if CSSDA operated a gallery site on the side because it appeared to post very similar content and looked very similar to our first site. We had been aware of this copycat when he launched in 2011, following our launch in 2010. We told the offending operator to stop it back then and he changed things around a little. We had forgotten about this until recently when it was brought to our attention that he was now plagiarising our content and had plagiarised our 2013 site award badge.

Like the car example there are inherent elements to being an award platform. Besides things that are proven over time like ethics, fairness, consistency and morals; the inherent elements required to run an award platform include prizes e.g. certificates and a kick-ass trophy, a judging team of experts that bring their own experience to the table. Some form of publishing platform will be needed such as a website that provides promotion for the winners and active community members. Then as the platform grows it will eventually eventually introduce printed publications and a prize giving ceremony.

The formula has been set in stone for a long long time and the elements are like the wheels on the car ~ inherent to the core function of an award platform.

With this in mind, the small but mighty crew at CSSDA have grown our site to be a leading web award platform by trying to innovate and bring something new to the industry. We have all put in considerable years through both education and experience. Others have not bothered to do things the hard way, choosing to copy our design assets and unethically ride off our success to simply chase a quick buck while unashamedly fooling designers, sponsors, blogs and the public. 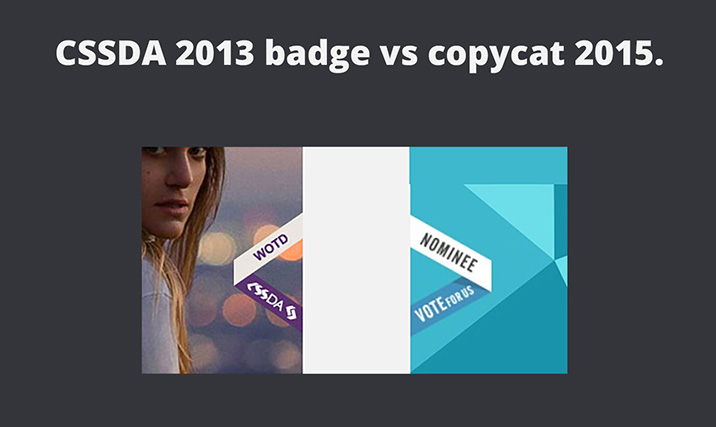 So how much is too much? In our opinion CSS Winner, the worst offender, has more than crossed the line into the realm of blatant design theft as the following facts demonstrate:

Shortly after launching our birthday celebration site "Chaos and Candy", CSS Nectar ripped our design in an unflattering way and is still using it to this day.

Take a look at the picture below and note the purple social icon bar, the exact same social icons, the teal column with angled piece at the bottom, the positioning of the filters in the right column. In the second shot we've got a copy of our gallery but instead of the teal filter bar as in our current site, the filter backgrounds are red. 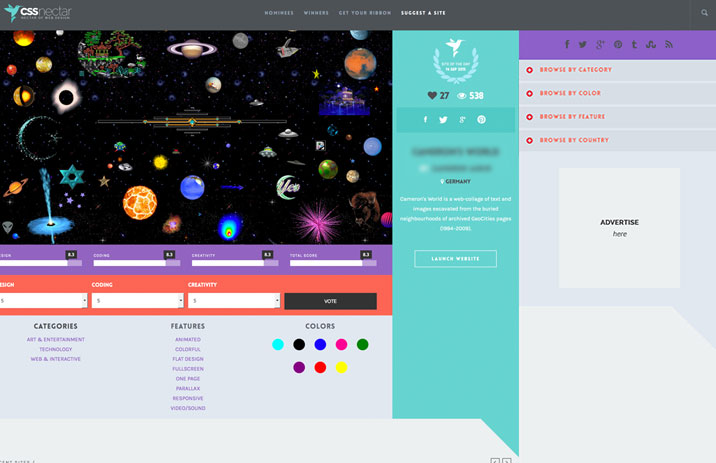 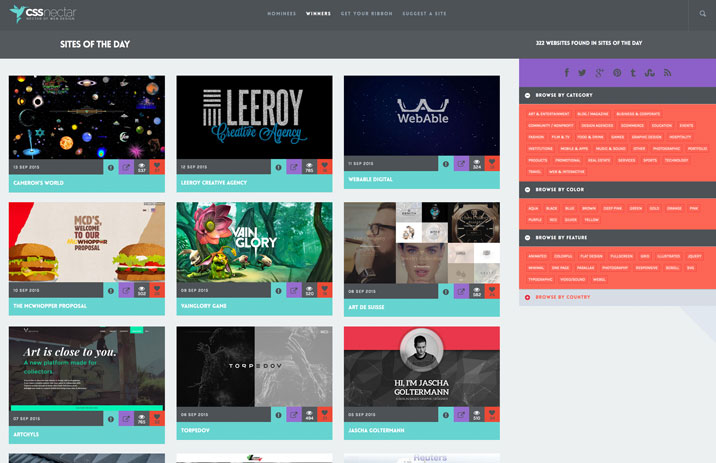 CSSawds launched as CSSawards.net in March 2011, seven months after we launched - and wait for it... three days before CSS Winner launched. An amazing coincidence or something more?

In 2015 we were alerted by members of our community that CSSawds plagiarised our logo icon. Not once, but twice. The second, using our brand color purple/violet for his second site onepageawards. We checked it out and agreed that out of all the shapes in the world, these were pretty damn close.

Since ripping our logo however, CSSawds has now started the nasty tactic of stealing our site submissions and awarding them on his site, the exact same tactic used by the other two plagiarists above.

CSSawds has finally bent to industry pressure and changed one of the two stolen icons. We're half way there but it's not good news yet because this unethical operator has simply stolen from someone else and performed his usual minor changes. Worse still, when the designer he stole the new icon from contacted him publicly on Twitter, CSSawds flatly refused to change it. The original designer was not that fond of the logo anyway and decided to design himself a better one and let karma take care of it. What would you have done?

A network of rip-off sites

It turns out that CSSawds also ripped a swag of site names from popular sites to create a network of fake award accounts on Twitter. The purpose? To fool designers that submit sites to him into thinking his posts are popular. 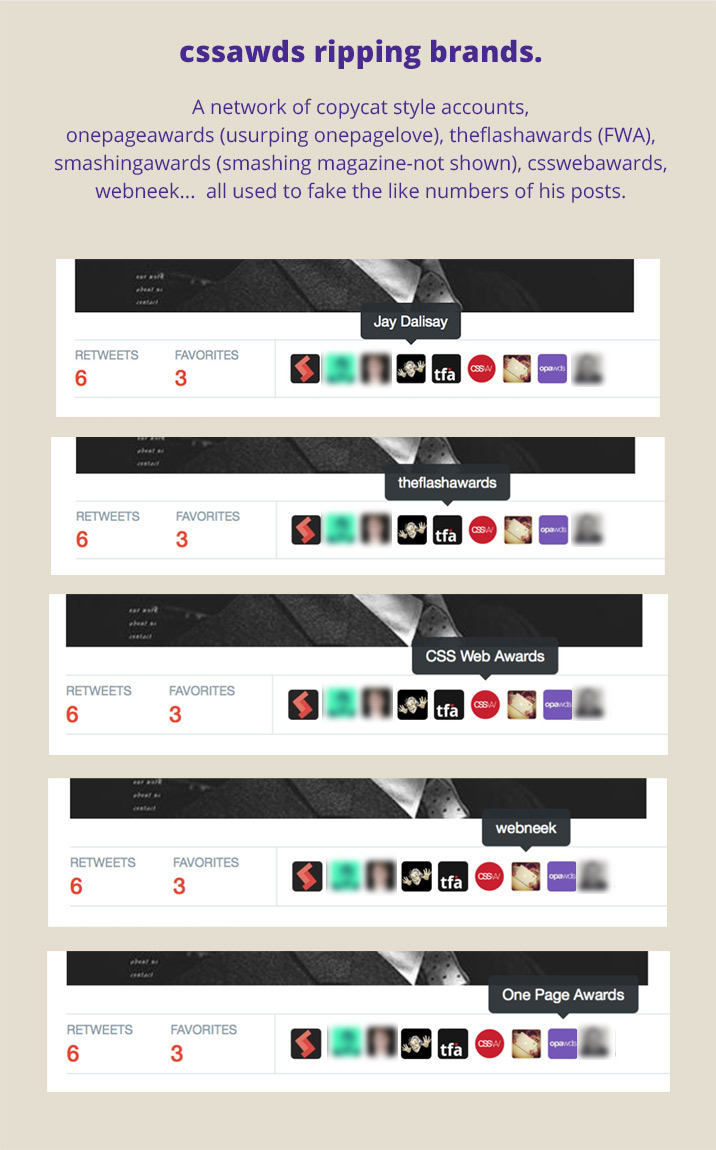 Another plagiarist has just launched, bestcssawards, possibly by the same person behind CSS Winner following the similar response we received when contacting him about the clear breach of copyright. This time the design thief stole our about page text and did not even bother to remove our name. The word-for-word copy also includes our "Shiny Brackets" trophy and international judging panel. 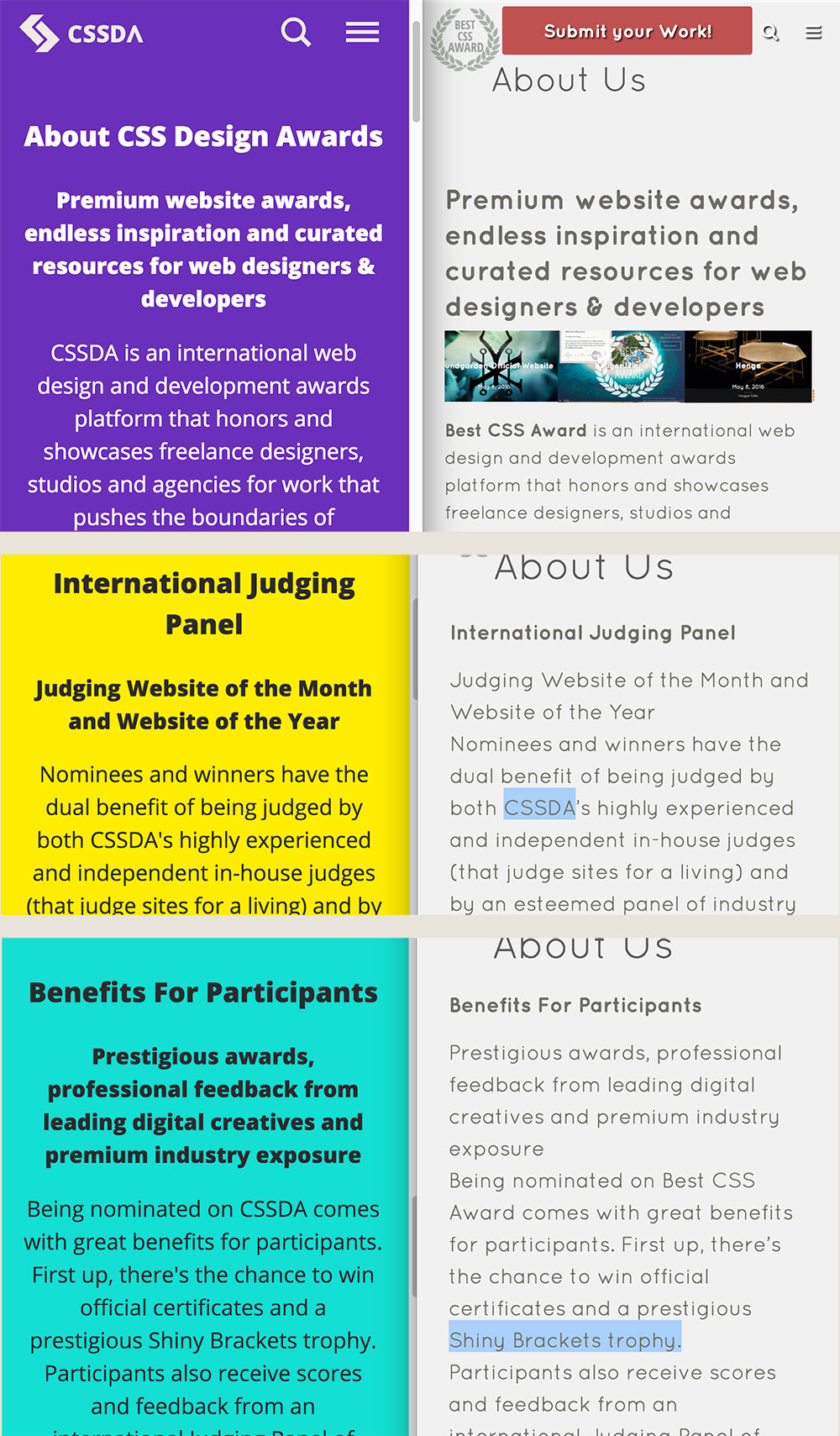 Thanks to amazing and overwhelming support from our community, the new plagiarist has removed our name and changed the text on his site, although he still has a few copied sentences in there and claims to have an international jury and other faudulent statements. Again, in similar fashion to CSS Winner, there is no apology or considerable changes made to his site.

To finish up this exploration into plagiarists specific to our site, it is worth noting that the plagiarists claim to have launched before us, or at the same time as us as evident by the fraudulent 2010 copyright notices in the footers of the plagiarists' sites. So here is the domain registration history to set the record straight versus. Nuff said. 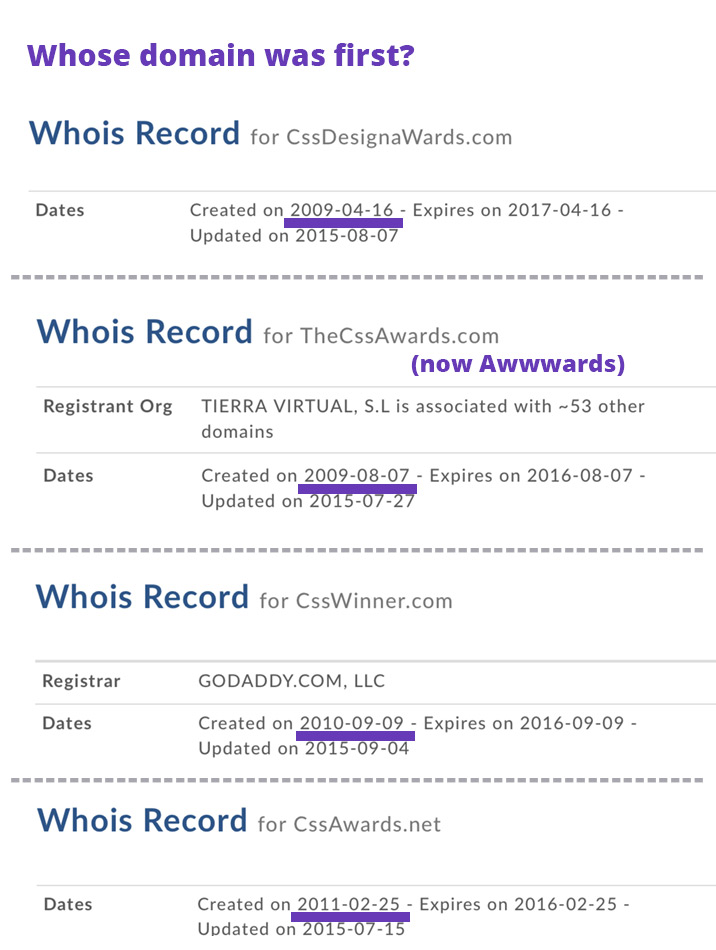 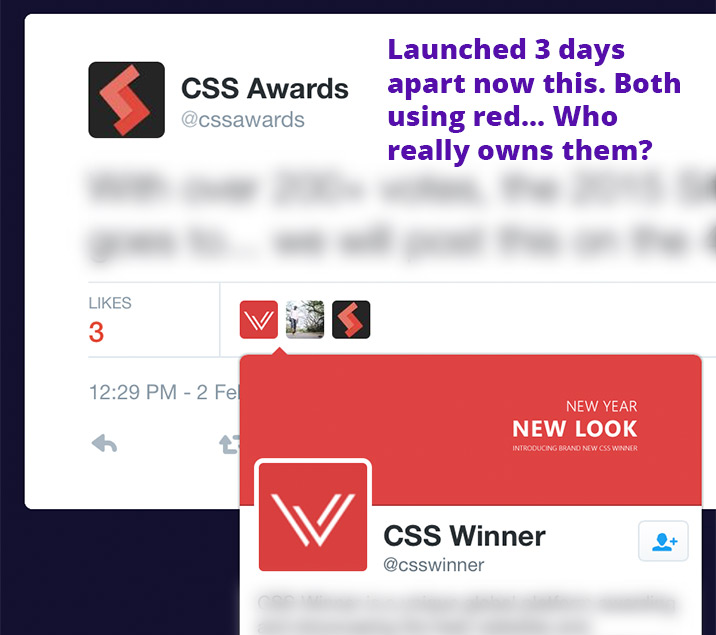 Plagiarism is an age old problem that's not about to go away in a hurry and for all the great things the internet has brought, it also brought an easy 'right click, copy' way to steal. Back in 2011 an article appeared on yourinspirationweb.com about the portfolio site of Peter Pearson. Peter's work was plagiarised so many times it was referred to the most cloned portfolio on the web. See the story via Your Inspiration Web » 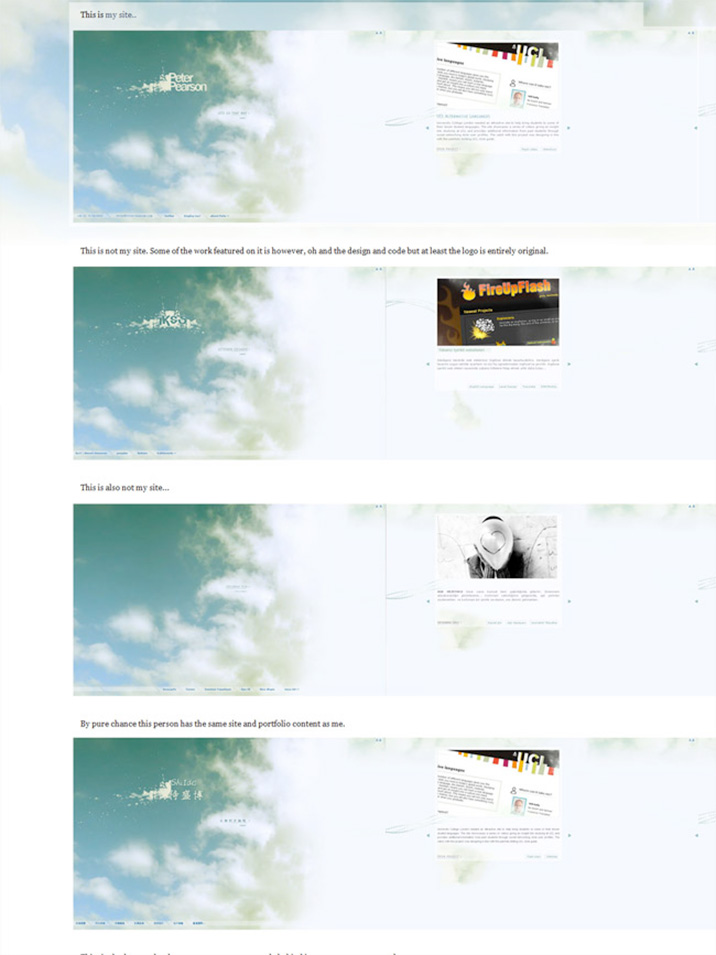 But that was nothing compared to the legion of fans that fell in love with Adham Dannaway's portfolio. Check out his blog page that displays no less than 18 (and counting) examples of his work being ripped. In this case the extra attention and speaking out about it helped Adam rise to a kind of legendary status. Such is the power of design in the right hands. See the story via Adham Dannaway's website »

Richie Meldrum at YOKE asked the question in March, 2013 "When Does Web Design Inspiration Turn into Plagiarism?" Again there is no doubt here that the plagiarist went overboard in finding inspiration in this work. See the story via YOKE's website » 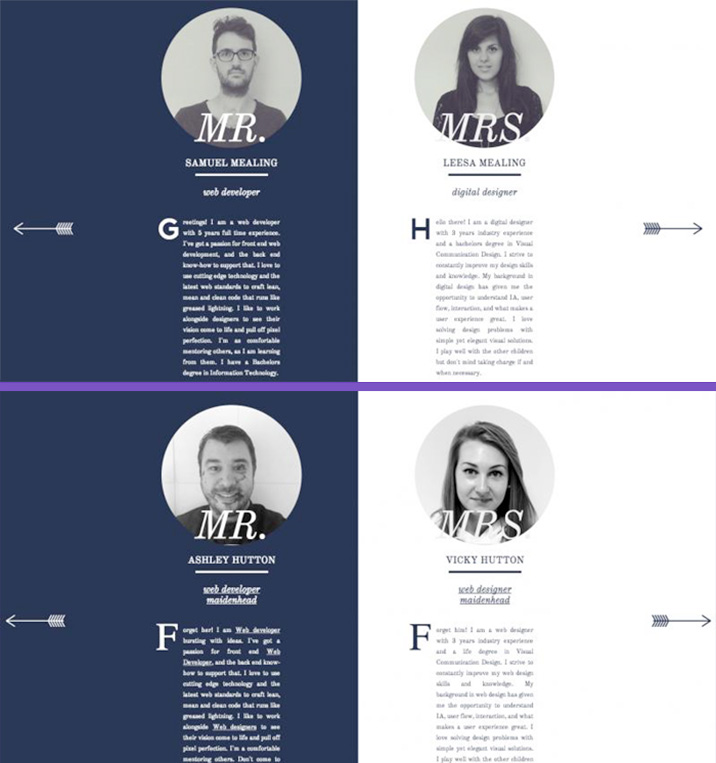 YOKE also reported that their own site had been plagiarised and again, this 'name & shame' sent a strong message to the community that plagiarism will not be tolerated and most likely served to empower future victims to do the same. See the story via YOKE site » 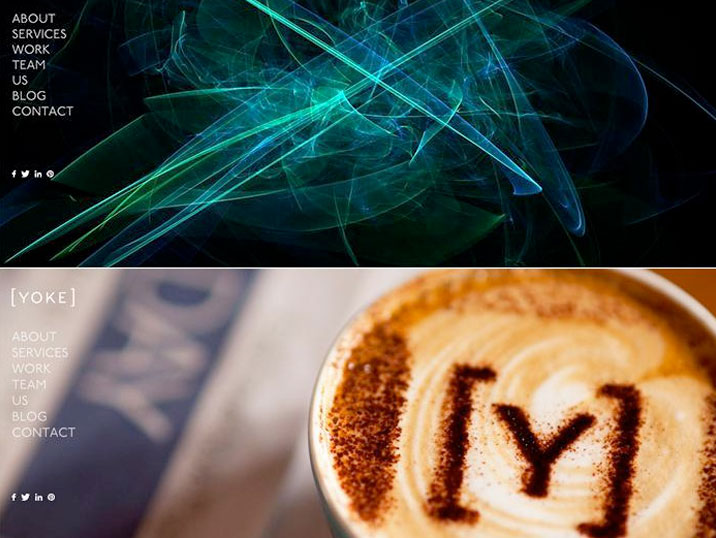 Brian from Brian Joseph Studios discussed plagiarism in an article titled "Why You Shouldn't Hire Cheap in Web Design". In it he explained that one of their team saw a rip-off of an Australian designer's work that was blatant plagiarism. They decided to do something about it and reported the theft to the rightful owner. Shortly afterwards the copycat site was changed. Brian went on to comment "The internet is quite a small place when you've got web designers networking online everyday and supporting each other!" See the story via Brian Joseph Studios' website »

How close is too close?

Knowing how much inspiration is too much comes from experience. Reputations develop over time and although the serious bad eggs think they're fooling everyone on a day to day basis, people see through their deceptive methods sooner or later. Those that are out to help the industry will shine over time.

In design as in life, there is always a choice. You can either join the dark side by ripping off others and take your place as a slave on the Death Star ~ or you can embrace the force, develop a passion for original creativity and help create a vibrant and flourishing Q continuum. It's all about choice.

Support from CSSDA if your work is ripped off

One day it will happen to you. You'll wake up, check your socials, browse some sites and bang! There it is. Someone ripped your site. So how can we help? We are not design cops and have no way to know who was first in designing the sites in question therefore did not do much in the past other than check the evidence provided. But now in our 6th year and having proven our rightful place in the web design & dev community as a central hub, we have a voice. We are willing to be there when you need help with this issue in any way we can. If we all stand together like blades of grass standing tall, then the weeds have nowhere to grow.